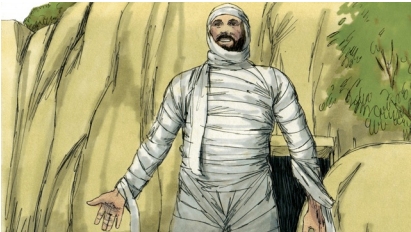 Today was all about death. God revealed his active role in my circumstances through worship. I heard the song “Beautiful Blood” by Kutless for the first time this morning, and I cocked my head in disbelief. It referred to death as being sweet. For someone mourning the tragic death of her son to suicide, the opening line was not something I am easily inclined to accept. My spirit is resistant to stating anything about death as beautiful. Death is our brokenness, death is our bodies breaking down, death ends our connection to our loved ones, death is cancer, death is loneliness, death is final.

My pastor called death a bully this morning! Jesus’ friend Lazarus had been dead for four days, and it was impossible to come back from. Death didn’t even have the decency to spare Jesus’ best friend! Why in the world didn’t Jesus save his friend while he still lived? Like Mary and Martha I want to cry out. Say the word Jesus and my son is healed, say the word Jesus and my marriage is restored. You know that I love you, you know that I follow you. Don’t I deserve something extra? Thomas, Jesus’ disciple, responds to the death of their friend by saying, “Let us also go, that we may die with him. Oh, I have never understood Thomas’ grief more than now (John 11).

You and I may struggle to look beyond death, but Jesus has heaven in view the whole time.

He comforts the sisters of Lazarus and his disciples with these words, “I am the resurrection and the life; he who believes in Me will live even if he dies, and everyone who lives and believes in Me will never die. Do you believe this?” Oh Jesus, I want to believe, help me with my unbelief! Jesus had raised others from the dead, but not after four days in the tomb. The other miracles could be explained away, but not Lazarus walking out of the grave alive. While everyone was celebrating the miracle, Jesus had signed his death warrant.

Today is all about life beyond death because Jesus’ chose death on a cross, in my place. His death is beautiful because he died while I could do nothing about it. I was still caught in sin and he chose me! So his blood is beautiful because I know that my son’s suicide is not the end of my story. God will be glorified.